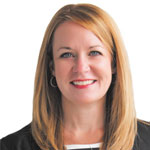 Winners
Whitney Fike
The communications manager for International Paper has been selected as a member of Leadership Florida Connect Class 10. Leadership Florida Connect is the premier statewide resource for educating, engaging and inspiring Florida’s top emerging leaders. Connect selects a diverse class of 46 Florida leaders—corporate CEOs, business owners, educators, elected officials and non-profit executives—to participate in an eight-month learning experience that will take them to communities across Florida.

John Powell
Imagination Playground selected Rev. John H. Powell to be the 2019 Summer Block Champion. Block Champions are those inspirational leaders or teams enthusiastically using the Imagination Playground Blue Blocks to engage children in learning and fun. For more than 25 years, Powell has volunteered time to the support and education of underserved youth through his unpaid role as executive director for Truth for Youth. Under his leadership, Truth for Youth has expanded service to several surrounding counties and continues to evolve as the community needs change. To date, the program has impacted more than 80,000 youth and their families.

KC Gartman
The leader of the Baptist Health Care Foundation has been named chief development officer for Baptist Health Care. In her expanded role, Gartman will also oversee the growth and expansion of the Foundation’s planned and endowment giving, major gifts, grant writing, corporate giving, grateful patient and family programs, and campaigns. She will continue to provide assistance with Baptist Health Care’s community outreach and community support efforts.

Losers
Doug Underhill
The Escambia County Commissioner for District 2 once again failed to win support from the rest of the commission. Underhill had asked them to approve paying for his legal defense in an ongoing libel case involving his Facebook posts. He wanted the county to spend $350 per hour to hire an attorney to defend him in the case brought by a Pensacola political consultant whom Underhill had attacked on Facebook. The commissioners said the comments were outside of his duties as an elected official.

J. Christian Adams
The former member of Trump’s Presidential Advisory Commission on Election Integrity has settled a lawsuit over reports released by his group, the Public Interest Legal Foundation, that accused hundreds of Virginians of illegally voting and committing felonies. The lawsuit stated that the reports amounted to defamation and voter intimidation. PILF agreed to remove the private information from their website and to issue a public apology. The voter fraud commission disbanded in 2018 without issuing a final report.

Mary Beth Jackson
After fighting for months to keep her job, the former Okaloosa County Superintendent of Schools resigned last week. Jackson had appealed her suspension to the Florida Senate, but her resignation put an end to that process. Jackson hand-delivered a resignation letter to the Florida Department of State, minutes after DeSantis issued an executive order that revoked her suspension and reinstated her with the expectation that her resignation was imminent.