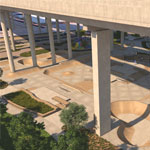 Skateboarders in Pensacola will soon have a public skatepark near downtown, as the city intends to construct one beneath I-110 as part of the larger Hollice T. Williams Greenway project. Before the construction, however, the city is planning to install so-called “skate spots” in the area.

“The idea is, throughout the park, you’ll be able to hit different spots as you go along,” Pensacola Mayor Grover Robinson explained. “It won’t just be the skatepark at the end of Wright. Really, the Hollice T. Williams will give you the opportunity to hit different skate spots when you eventually hit the skatepark.”

The mayor announced the skate spots earlier this month along with local skater Jon Shell, who dreamed up the skatepark under the interstate and launched a nonprofit, Upward Intuition, to make his vision a reality.

“We’re working on having skate spots scattered sporadically through the linear park so it’ll lead into the skatepark,” Shell said. “I’m really excited because I live in East Hill, so it’s downhill on Gonzales Street all the way to I-110. Eventually, I’ll be able to ride from my house in East Hill, end up in the linear park, hit some spots, connect into the skatepark and then into our downtown.”

The skate spots will consist of large, precast concrete slabs. If the slabs look familiar, it will be because they’re leftovers from the federal courthouse downtown currently getting a facelift.

“They have these 20-, 30-, 40-foot pieces of structural concrete, many of which end up as reject pieces,” Shell said.

“They’re going to gift the city some of these reject pieces, and we’ll be able to use those for skate spots,” Shell said, explaining that skaters like to use such structures the same way they incorporate various aspects of the urban landscape. “They like to find obstacles that challenge them in the streets—ledges, stairs, rails and things like that.”

When announcing the skate spots—scheduled to be installed this fall—Robinson and Shell also teased another element of the project. The city is working with the Institute of Human and Machine Cognition to implement an interactive learning component at the skatepark.

“These skate spots will include not only a safe area for our skate community,” Mayor Robinson said, “but they will also create interactive locations that will serve as building blocks for STEM and STEAM learning.”

A couple of weeks later, David Fries, an interdisciplinary research scientist at IHMC, sat down for a discussion to dig a bit deeper into this augmented reality aspect of the park. He said, “This is really about objects coming alive with information.”

The Invisible Behind the Visible
Fries isn’t just a research scientist or some brain-trust genius holed up on the IHMC campus. He’s also a skater.

“Normally, I skateboard into work every day,” Fries said. “I love it. I get to see the cracks in the sidewalks, get to know the city.”

A while back, the research scientist skated over for a beer at Gulf Coast Brewery, where the bartender, familiar with Fries’ work, made a fateful suggestion, “Oh, you ought to catch up with Jon Shell.”

Fries’ work involves augmented reality, or AR. The scientist was already plugged in with the city, working on an AR project at Bayview Park. Listening to him describe his work, it sounds less techie and more metaphysical, nearly existential and almost esoteric.

“You can start to see the invisible behind the visible,” Fries explained.

His work entails using AR to transform a landscape into a virtual learning lab. Employing an arsenal of specifically placed sensors and tapping into ever-evolving technologies like image recognition and ever-expanding collections of information via the internet, the scientist enables a field of information anyone with a smartphone can tap into.

Fries holds up his phone. He notes how people, especially younger people, have become inseparable from their technological devices.

“You’re not going to be able to wrestle this from them,” he said, waving the phone. “So, how do you harness this for good?”

Fries sees an opportunity here to put the ever-present screen to use—“not for entertainment or escape, but as education”—and, a bit ironically, use technology to acquaint people with the natural world better.

“This is a gateway to help people reconnect with the outdoors,” he said of the phone.

Fries said that Bayview Park provides an ideal landscape for the type of AR work he’s looking to do. The park has rich, tree-filled grounds. It’s on the waterfront of Bayou Texar and also features multiple man-made structures, such as the new community center currently being constructed.

Fries focuses in on a theoretical tree at Bayview. This tree, he explained, is full of information. Once the park, and this tree, is outfitted with sensors, someone can point their phone’s camera at the tree, at which point the tree’s species will be identified using image recognition. But that’s just the beginning of the story that such a tree can tell. People can also learn about its age, its seasonal changes, its root structure, how much water it intakes and oxygen it outputs and on and on.

“The history, the science,” Fries said. “Imaginative studying could happen around this tree. It becomes a kind of tree of knowledge.”

Or point a phone at the new community center. Drawing information from the internet, the AR project would allow a viewer to learn the building’s particulars, when its completion is expected or even display photos of the former community center on the site.

“The world around you starts to educate you; it speaks back to you,” Fries said.

As this AR project is deployed and used by people, it feeds on the information it receives, its capability growing the more it’s used. In essence, the system will be able to learn and expand its knowledge base, which will, in turn, expand the amount of information it can dispense.

Fries’ AR project at Bayview will be replicated at the skatepark. In addition to providing the varied information about the natural and manmade landscape in the surrounding area, this installment can also be put to use by skateboarders, who can employ AR to mathematically breakdown skatepark features or analyze their tricks.

“There’s opportunity to expand what a skatepark is,” Fries said.

A Smart City
Once the AR projects are up and running at Bayview and the skatepark at Hollice T. Williams, Fries would like to see additional areas of Pensacola outfitted with such capability. He’d like to deploy AR along the downtown waterfront, at Bruce Beach and elsewhere, maybe everywhere.

“You’re starting to blanket the city,” Fries explained the concept, painting a picture of a city that spoke to its people– “an educational city, a smart city, where you’re making the city smarter.”

Such an educational landscape could be put to use any number of ways. School field trips or tourism draws are easy to imagine. But the technology could also be used for purposes such as creating stormwater maps.

Such AR technology could enable Fries’ vision of seeing beyond the given field of reality, allowing information to seep out of thin air.  He said, “It’s about the real world starting to talk back to see and hear the invisible.”

Wiring up meaningful expanses of the city will be a costly, involved endeavor. But it may be something Mayor Robinson is up for entertaining.

“More city parks and assets, we want to incorporate ways for children to  learn,” he said when announcing IHMC’s AR component at the skatepark. “They go there, there’s a natural environment, there’s no reason they shouldn’t be learning.”