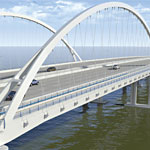 Cervantes Safety FDOT is looking for public feedback on its plans for West Cervantes. The department wants to know how people who use the street feel about the improvements aimed at making the route safer for both pedestrians and drivers.

Dubbed the West Cervantes Pedestrian Safety Plan, these improvements are a collaborative effort between FDOT, the city of Pensacola, Escambia County and the Florida Transportation Planning Organization. The $7.5 million project encompasses 2.3 miles of roadway—from Dominguez Street to A Street—and work is expected to begin in the fall of 2020.

In the plans designed and presented by FDOT on July 16, improvements included reducing lanes from 12 feet to 10 feet and adding crosswalks, along with accompanying crossing signals, along the corridor. In the expanses between these crosswalks, which stretch for blocks, median barriers would be installed to prevent pedestrians from crossing the street.

While the barriers do prevent pedestrians from crossing the street, they also present some challenges. Drivers, for example, will no longer be able to cross freely on cross streets from one side of Cervantes to the other, but will rather have to travel to an intersection featuring a break in the barrier.

“I’m thinking about how are people gonna get to the Elbow Room?” asked Jonathan Owens, noting that a pedestrian barrier makes it difficult for drivers in the opposite lane to enter his Cervantes Street establishment. “That’s not just me. That’s any of these businesses.”

Running his finger along the map’s orange line depicting the pedestrian barrier, Owens—who also serves as the assistant to Escambia County Commissioner Doug Underhill—pointed out how the area’s grid-street system would be broken up by the divide.

“There’s a reason why the streets are gridded. You’re eliminating the grid,” he said. “It makes it less walkable.”

This was a common sentiment. FDOT equipped attendees at the meeting with green and red circle stickers to be placed respectively on areas of the map where they found improvements they liked, as well as ones they did not favor. The red stickers quickly lined Cervantes, placed at pretty much each intersection where the pedestrian barrier blocked passage.

Drew Buchanan, who studied walkability and connectivity issues as a member of Pensacola Mayor Grover Robinson’s transition team, said he was also overall excited about the West Cervantes project—“the fact that we’re doing this and it got funded, that’s a win already”—but also expressed some reservations about the street grid being broken up—“that’s what makes Brownsville so special”—and the long stretches of the corridor without crossing options.

Satter said he recognizes concerns about preserving the street grid and about the impacts to businesses in the area—“you have to balance everything”—but that “safety is always going to take the priority.”

“This is safety, safety, safety,” Satter said, explaining that FDOT’s primary objective is improving safety, minimizing the pedestrian-vehicular accidents along the corridor.

FDOT will be hosting a second meeting to gather public input on the West Cervantes safety improvements on August 13, from 2 to 4 p.m. at the Fricker Community Center. The public will also have a chance to formally comment at a meeting slated for this fall.

Gannett Merger Talks Several media outlets reported last Friday that Gannett, owner of the Pensacola News Journal, may merge with Gatehouse Media, who owns nearly 700 papers across 39 states, including the dailies in Fort Walton Beach and Panama City. Gannett is the biggest newspaper chain in the U.S. by circulation.

Cash for Teachers Florida Department of Education has allocated $15.8 million in federal funds to incentivize teachers with proven records of success to serve at Florida’s D or F schools. Eligible teachers will receive as much as $15,000 in supplements. Escambia County has four D schools—Holm and Warrington Elementary and Workman and Warrington Middle.

“Every Florida student, regardless of their background or their family’s income, deserves great teachers who empower them to break down any impediments that encumber their life’s freedom,” said Education Commissioner Richard Corcoran. “This is another way we are leveling the playing field for all Floridians, and we are thrilled for the opportunity to reward our state’s hard-working teachers in the process.”

Eligible teachers are those who have earned a highly effective or effective rating based on the state’s value-added model calculation (when aggregated over three years) and teach at a Title 1 school with a 2019 school grade of D or F as of August 30.

“We must constantly challenge ourselves to find ways to more effectively spend our resources on what matters the most, getting every student in front of a great teacher and implementing ideas that drive great outcomes for our students,” said Commissioner Corcoran.

City Gets Federal Grant The U.S. Department of Commerce’s Economic Development Administration is awarding a $12.25 million grant to the city of Pensacola to be used toward furthering efforts to build out an aviation-maintenance campus near Pensacola International Airport.

The grant announcement was made during an event inside an already online hangar where ST Engineering got down to business last year. Local officials are hoping the overall effort puts the region on the map when it comes to state-of-the-art aircraft maintenance, repair and overhaul (MRO).

The $12.25 million EDA grant, together with about $36 million in matching funds from the local and state level, will be used to construct a 173,000 square-foot hangar. The new facility will also feature a 60,000-square-foot services center, where ST will locate space for engineers, management and other support-related offices. Construction is expected to commence in the latter part of 2020.

“We’re gonna have a lot of opportunities for the folks in Northwest Florida,” said Bill Hafner, president of VT MAE, which oversees the Pensacola campus.

This new hangar will not be as large as the final two hangars planned for the Pensacola MRO campus, which will run north of 200,000 square feet and be designed to facilitate larger aircraft.

“It’ll be over a quarter-mile in length from one end to the other,” Hafner said, projecting that once the entire campus is built out, the operations will support 2,000 employees.

As the event wrapped up, Mayor Robinson directed his comments to ST workers at the event.  He said, “It is you that has proved Pensacola can do this. We’re going to work hard to make sure there are jobs here for you to have.”

From 8 p.m. Sunday, July 28, to 6 a.m. Thursday, Aug. 1, 17th Avenue will be closed to through traffic between Gregory Street and the CSX Railroad overpass. Drivers will be detoured using Ninth Avenue and Cervantes Street. Access to the visitor’s center, boat ramp and the Pensacola Bay Fishing Pier will be maintained for local traffic via 17th Avenue.

The temporary configuration for the new bridge will provide two lanes of eastbound and two lanes of westbound traffic, along with a center lane reserved for emergency vehicles. A multi-use path for pedestrians and bicyclists is expected to be operational approximately two months after the traffic shift.

With all traffic shifted to the new bridge, construction crews will demolish the current bridge, complete the new westbound structure and reconstruct the 17th Avenue interchange. All work is currently estimated for completion mid-2021.

Is Hill referring to insurance or helping downtown residents move right on the political spectrum? Hill is also a state representative whose political views have included banning abortions with no exclusions, reversing the gun reforms passed after the Parkland shootings and opposing any protections in the workplace for the LGBTQ community.

The proposed $245 million budget addresses what the mayor called “pay inequities.” Alluding to a recent employee engagement survey, Mayor Robinson said, “Clearly, that was one of the things that came through very loud and clear, that we haven’t been investing in our people, so we are looking to a make a fairly sizable investment in our people.”

The mayor explained that some of an employee’s potential pay increase rides on performance-based measures. He said, “These are certainly things that have been happening in the private sector for a long time.”

City Administrator Chris Holley later explained that the city had engaged Evergreen Solutions to evaluate the city’s pay rates in comparison to similar markets. The findings, in essence, verified the concerns the city administration was hearing from employees—Pensacola’s pay was a bit low.

“We were, overall, about 4 percent out of market,” Holley said, adding that some positions were actually lower than that, while some others were higher than the going rate.

So, on average, the mayor’s proposed budget contains a 4 percent pay increase for employees, and employees can also earn another 2 percent via performance-based increases. Robinson said he views the latter as important in connecting the employees to the city’s overall mission.

“It kind of gives them a roadmap to say, ‘This is what we need to do, and if we do this, we provide good service,” you know, the organization recognizes that,’” Robinson said.

“The sheer breadth and wide-ranging scope of prison censorship in Florida is astounding,” said Paul Wright, executive director of the Human Rights Defense Center, “but it should come as no surprise that a prison system that routinely murders and rapes its prisoners with impunity would also routinely trample the free speech rights of those prisoners and the publishers that wish to communicate with them.”

State prisons have broadened the use of “threats to security” to include information that could help prisoners understand their experiences with incarceration or seek political or legal help. Moreover, books that discuss or criticize brutality, corruption, misconduct and racism in the criminal justice system in general and prisons, in particular, are singled out for censorship.

Among other publications improperly banned by the Florida Department of Corrections due to alleged security threats are Dictionary of Computer and Internet Terms, Danish: A Complete Guide for Beginners, Exotic Chickens: Coloring for Everyone: A Fun Anti-Stress Coloring Book and Advanced Dungeons & Dragons.

Zeroes for Zeroes Last week, the Zero for Zeros campaign released a second round of data highlighting the disparity of banks, investment firms and other financial services companies who receive a perfect 100 rating from the Human Rights Campaign’s Corporate Equality Index but in turn fund elected officials in the House of Representatives and the Senate who lead opposition to LGBT equality.

“These financial titans are proud supporters of their LGBT employees and customers, but at the same time, they are donating to some of the most vociferous opponents of LGBT equality in Congress,” said Lane Hudson, Zero for Zeros’ campaign manager. “Our allies, especially major corporations with recognizable brands, need to be with us 100 percent of the time, not just during Pride Month.”

Zero for Zeros will be targeting the following companies in its second wave, some of which are the most recognizable brands in the financial services industry—Wells Fargo, Morgan Stanley, JPMorgan Chase, Capital One Financial Corp, Citigroup, Cigna Corp, PNC Financial Services KPMG Ernst & Young, Deloitte, PricewaterhouseCoopers, Massachusetts Mutual Life Insurance and Compass Bank.

Zero for Zeros found that 49 companies have contributed over $5.8 million from their corporate PACs to the politicians who work against equality.

“There is no logical rationale for a company that supports the LGBT community to support politicians that work against it,” said Charles Myers, Chairman of Signum Global Advisors.