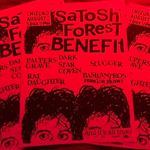 For years, Mike Kimbrel has been an active voice in community conversations about homelessness. Apart from his tireless activism in this arena, he runs Satoshi Forest, a nonprofit that operates a private parcel of land dedicated as a “homeless sanctuary” that serves individuals without housing options.

Soon, Kimbrel will do something beyond the normal scope of his efforts to contribute toward solutions for the local homeless community. He will play the drums. Fast.

On Friday, Aug. 2, chizuko is hosting a benefit show to raise funds for Satoshi Forest. The bill boasts five different bands, two of which Kimbrel plays drums in.

“Jess [Laws] and Daisy [Doyle] are huge supporters of what I do,” Kimbrel said, relaying how chizuko’s owners offered to stage the event.

Past benefits for Satoshi Forest have netted the organization between $200 and $1,200. Kimbrel’s hoping the upcoming event brings in at least a grand.

“That would help us float along for another month,” he said.

A Home for the Homeless
Satoshi Forest was founded in 2013. It serves as a place where the homeless can find a spot to pitch a tent and catch their breath while attempting to secure housing.

For the first several years, Kimbrel was constantly wrangling with Escambia County over the encampment. Satoshi has persisted despite nearby residents fighting the effort and the county presenting both regulatory hurdles as well as legal challenges.

Now, though, the project seems to have hit its stride and is generally accepted as one potential avenue through which to deal with area homelessness.

“It’s like we’ve come through the gauntlet,” Kimbrel said.

Recent improvements at Satoshi—made in an effort to comply with county development standards—include a driveway, fencing and a vegetative buffer between adjoining properties. Going forward, what Kimbrel describes as Phase II, there are plans to construct so-called tiny houses on the grounds.

Whereas local government officials were once at odds with Satoshi Forest, both the city of Pensacola and Escambia County now look to the outdoors-shelter project as a potential template to deploy in an effort to address the needs of the area’s homeless community.

Kimbrel, in fact, back-and-forths on this topic with Mayor Grover Robinson and other officials.

“We have been talking,” Kimbrel said, adding that he’s in favor of a day-use center concept currently on the table.

But, always a healthy skeptic, the homeless advocate suspects that the joint city-county efforts to address homeless will eventually circle back around to ordinances aimed at curtailing panhandling activity. This punitive path—hardly a new idea in the halls of local government—is something that he’s fought against for years.

“I’m not happy about that, and I’m not gonna play nice. I hope [the mayor] understands,” Kimbrel said. “When the ordinances come, there will still be a fight.”

Both of his bands serve as an extension of Kimbrel’s work with the homeless community. They also serve as societal statements. Paupers Grave concentrates on an economic theme, touching on what Kimbrel sees as economic inequities and society’s lack of prioritizing care for the poor. Dark Star Coven, meanwhile—described as a Satanic metal band—aims at religion and is intended to “be a counterbalance to the heavy religious right in this area.”

Such stances have made things awkward at times for Kimbrel, who actively networks throughout the community to further his homelessness mission—“I have to work with religious groups, and I have to work with the rich”—but for the most part, he says folks seem to understand.

“It’s a way for me to vent my frustration,” Kimbrel said of his bands.