The Pet Issue '19: A Feel-Good Feline 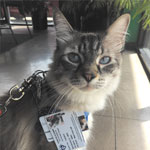 When you think of therapy animals, it probably elicits an image of a fluffy dog in a vest.

But we’d like to introduce you to Aslan the Therapy Cat.

While cats may sometimes get a bad rap for being indifferent or high strung, Aslan breaks that stereotype. For the past few years, the 7-year-old Maine Coon has been bringing joy to patients at facilities, including Summer Vista Assisted Living Community and Covenant Hospice.

“For some of these patients, their lives are very small,” explained Aslan’s owner and trainer Wayne Epley. “Some patients can’t speak, but you see the joy in their faces. It’s way better than words. Sometimes all they can do is cry.”

Epley, a retired Air Force veteran, began training animals about 35 years ago, mostly border shepherds. But he says a lot of the same rules can be applied to cats. In fact, Aslan is Epley’s third therapy cat—and possibly the only one currently in the Gulf Coast area.

“He went through a year and a half of training and is certified through Love on a Leash,” Epley said. “He’s technically certified to be a service dog since there wasn’t a cat option.”

Epley rescued Aslan and his brother, Thumus, when he saw they were being terrorized by a group of kids at a softball field. He didn’t think twice about taking them home. He started training them both, but Thumus failed his final exams.

As a therapy animal, Aslan has been trained to walk on a leash, respond to basic commands and not respond to sudden noises.

To keep his training up, Epley takes Aslan to sit in the lobby at Synovus Bank regularly so that he stays comfortable in public places.

There’s definitely the occasional shocked stare when strangers see Aslan walking around on a leash. It’s usually an icebreaker to learn more about therapy cats.

“People see the vest and his tags and so they’re very interested,” said Epley.

Even at 20 pounds, Aslan is gentle, especially with patients. Epley keeps his claws clipped and bathes him twice a month to reduce cat dander.

Aslan seems to enjoy the work he does, said Epley. Working with hospice patients, often Aslan is visiting friends for the last time and offers some comfort to those who need it most.

“He’s a gentle soul,” Epley said. “I don’t try to understand how he knows, but he knows who needs some extra attention.”

When it comes to training cats, Epley warns not to expect a miracle overnight. He said that anyone interested should do their homework first and suggests books by known dog trainer Barbara Woodhouse.

With some love and consistent training, perhaps your cat could spread joy like Aslan. It’s work, but it’s as rewarding for Epley as it is for everyone else.

“I’m very blessed to be able to do this for people,” he said.