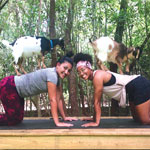 That’s the mantra of Grateful Hearts Yoga—a studio that started offering a monthly goat yoga class at Emerald Coast Zoo in Crestview in the fall of 2018.

“The goats are interacting with us,” Simmons said. “They will sometimes run through our practice and just make everybody laugh. Sometimes they’ll head butt each other and cause a few giggles. Sometimes they’ll jump up on people when we’re in poses they think they want to join in on. Other times, I’ll place the goats on top of people and let them experience feeling a goat on their back.”

The class incorporates Nigerian Dwarf goats, so none weigh more than about 30 pounds, Simmons explained. Because of their small size, this type of goat is a more likely pet than others.

Goat yoga is more light and fun than a focused studio class. It’s a stress-reducing time because the goats are naturally therapeutic animals.

“They’re calm when they want to be; they’re sweet and funny and cuddly,” Simmons said. “Adding them into a yoga practice increases that ability to forget what’s going on in your daily life and settle into this practice that’s calming and stress-reducing.”

The goats love it, too.

“It’s their favorite part of the month,” Simmons said. “They get to come into a new space and play, and they’re running around and eating the bamboo and having a good ole time.”

The class is held in a former snake enclosure—but don’t let that scare you. It’s a really beautiful and serene space, Simmons said.

“It’s a beautiful bamboo forest that was not being used,” Simmons said. “It has this beautiful canopy over the top and this bamboo that surrounds it. You’re sitting in the middle of nature— and then add the goats.”

Simmons grew up on a farm near Baker, so she loves animals and being in nature. When the zookeepers mentioned bringing yoga to the zoo, she was ecstatic.

“We have considered trying a few more (animals) at the zoo,” Simmons said. “I know around the world, they’ve done it with lemurs. They’ve had llamas. There’s kitten and puppy yoga for adoption events. We actually did horse yoga. We don’t do anything on the horses. The horses are just grazing around the barn or the field. It helps with any meditation practice when you can watch the animals. It helps you to focus your attention on something other than just your breath.”

What Simmons loves most about incorporating animals is how it brings many beginners to the mat.

“Some people who will be so terrified to ever step into a studio for some reason—because of the stigmas they have about yoga—they hear, ‘goat yoga,’ and they’re like, ‘Oh, I would try that,’” Simmons said. “It’s a cool way for me to introduce the practice of yoga to beginners.”

Goat yoga is one of those things everyone needs to try once in their life, Simmons said.

“It may not be everyone’s cup of tea because goats poop sometimes like any other animal, but once you try it, you can at least say you did it.”

Grateful Hearts’ next goat yoga event is Saturday, Aug. 24. To learn how to sign up, visit facebook.com/gratefulheartsyoga.